Those of you who know my work, may know that my two favorite places to shoot photos are on the streets of New York City, or in my beloved Central Park. You may have also noticed that I love to shoot photos in the absolute worst weather, and in some of the most challenging conditions. If it’s raining, or better yet, snowing, and at night, there’s a good chance that you can find me wandering somewhere in New York City with my camera.

Each year, after autumn comes to a close, I keep a watchful eye on the weather hoping that mother nature will bless us with a few inches of snow. Snow has a magical effect on New York City, coating every surface with a powdery blanket of snowflakes. The effect, seems to turn ordinary moments into dramatic and romantic scenes, reminiscent of what you might see in a movie.

While last year, we had a few nice winter storms, with most of the good stuff landing further north, this season’s unusually warm weather had me wondering if it would snow at all. Fortunately, last week, mother nature surprised us all with a whopper of a storm. Winter storm Jonas hit New York City with a fury that few storms in recorded history have matched. I was determined to document as much as I could.

The storm started early in the morning. While I love to shoot early in the morning, when it snows, it’s important for there to be a good coating of snow on the ground before you venture out. With sunrise around 7:00 AM, I wanted to get outside at least a couple hours before, so that the snow would be as undisturbed as possible.

I ended up waking around 5:00 AM. I bundled up as quickly as I could, grabbed my gear and headed out into the storm. A lot of people ask me what I wear when it snows and how I protect my gear while I’m out there. For Jonas, I wore a t-shirt, a sweatshirt with a hoodie, my winter coat, a rain coat, and two pairs of pants. I have an awesome pair of Sorel rubber boots that I wear, and some North Face gloves, both of which are completely waterproof. One of these days, I’ll pick up a pair of waterproof pants, as well.

In terms of gear, I try not to bring much. I will carry my Nikon D800, with either a 24-70mm or 70-200mm lens, a couple batteries and memory cards, and a flashlight. I carry a backpack with me, but it usually stays empty. I bring it just in case I want to get my gear out of the elements for a while.

My favorite piece of gear though are my trusty Wireless Beats Headphones. I used to have traditional wired headphones but I was always getting tangled up in them while I was shooting. So eventually, I bit the bullet and picked up a pair of Beats. While I’ve found that sometimes, they can pick up a bit of interference, they work perfectly about 90% of the time, and it’s well worth not to get tangled up in wires.

People also ask me how I protect my gear when I shoot in bad weather. I think it’s important to give your camera some protection, and I will generally bring a plastic bag with me to keep the snow or rain away from my camera and lens, but more often than not, I’ve found that the bag actually gets in my way, and forces me to miss shots. While a bag keeps my camera protected to an extent, it doesn’t matter how hard I try, at some point, mother nature always wins, and the camera will get wet or covered in snow.

Over the years, I’ve learned to trust my camera. While it’s not waterproof, it is weather sealed to an extent. If the camera gets a little wet, I just wipe it down with a towel and keep taking photos. On occasion, I’ve had some buttons freeze over but I’ve found that my D800 is pretty sturdy, and can handle the elements fairly well, but I would definitely recommend keeping your gear as protected as possible when shooting in the elements, especially if the weather sealing on your camera is not quite as good as the D800.

On the day of the storm, I wanted to shoot in a few strategic places. I wanted to get some photos of Time Square, Central Park, and on the Brooklyn Bridge. The problem is that shooting those three areas with as few people in the frame as possible is very challenging, even in terrible weather. The best bet is to get outside as early as you can. Unfortunately for me, I can only be in one place at a time. So for this storm, I went straight to Time Square.

What struck me the most about my trip downtown was just how few people were on the streets. Sure, it was 5:30 AM, but aside from a few heroes clearing off the sidewalks in front of their buildings, the city was a ghost town. 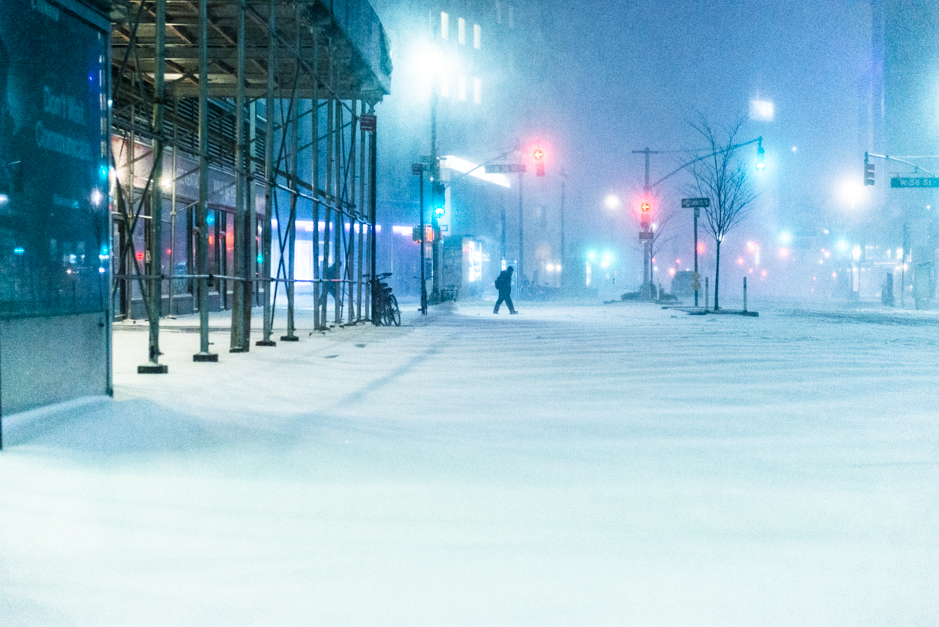 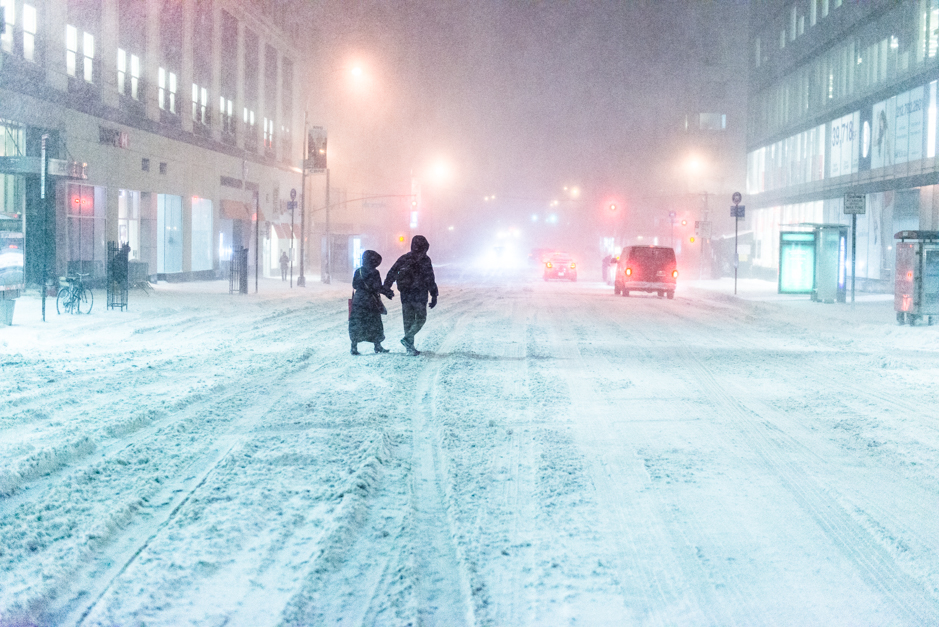 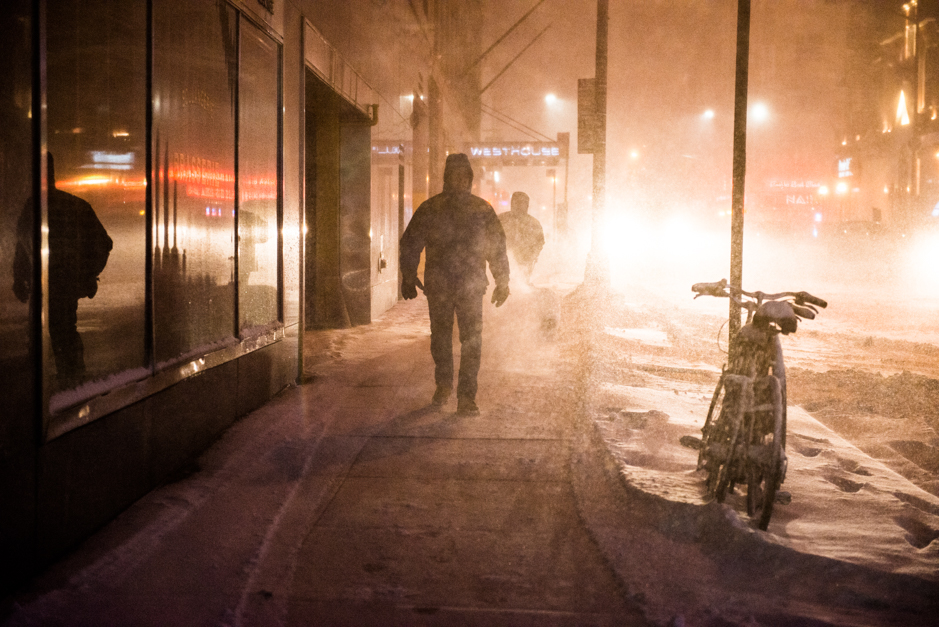 As I continued to snap photos on my way to Time Square, I was struck with just how beautiful the city looked. So quiet, so peaceful and magical. As I reached for my cell phone to post something about how beautiful the city looked, I realized that I was so excited to start shooting, that I had accidentally left my cell phone at home. I guess that explains why it was so quiet (no music was playing on my headphones). While it was frustrating to not have my phone, or to not know what time it was, I actually think that I was better off not having it. I was able to take in the beauty of the city, and focus more on what I was taking pictures of.

When I finally got to Time Square, I could not have been happier. There was practically no one there except for the few brave workers keeping the sidewalks clear. I got the shots I wanted, high-fived a handful of other photographers shooting in the storm, and then made my way towards Grand Central Terminal. I’ve always wanted to take a photo of an empty Grand Central and figured that this was as good a time as any to try. 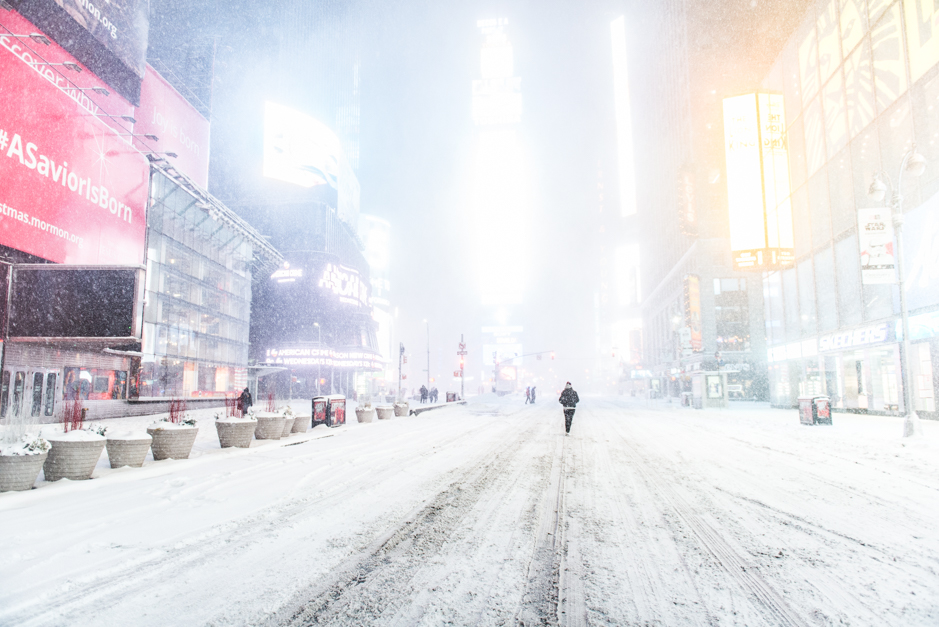 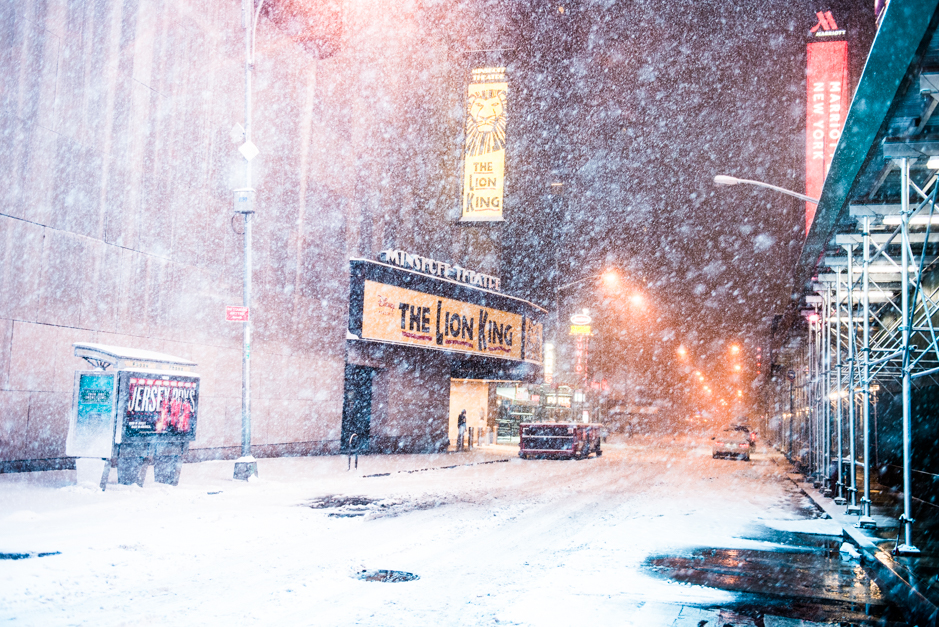 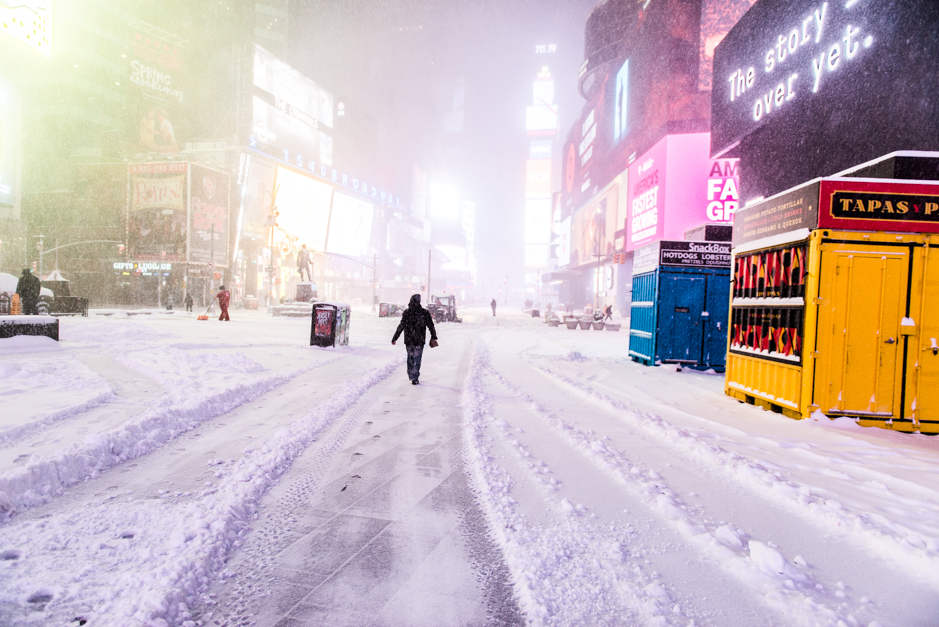 So I made my way east on 42nd street, stopping by Bryant Park to snap a few photos. It was in Bryant Park that I shot my favorite photo of the day, specifically the shot of the man clearing the sidewalk in front of the Grace Building. When I finally got to Grand Central, I realized something. If I was going to get the shot, I would need to be fast, otherwise my lens would start to quickly fog up. I made some calculations in my head, hoping to be able to guess the exposure, made sure I entered the building using the correct door to minimize the amount of time I would be inside, and got to work. I snapped a few quick shots and then left before my lens got too foggy. 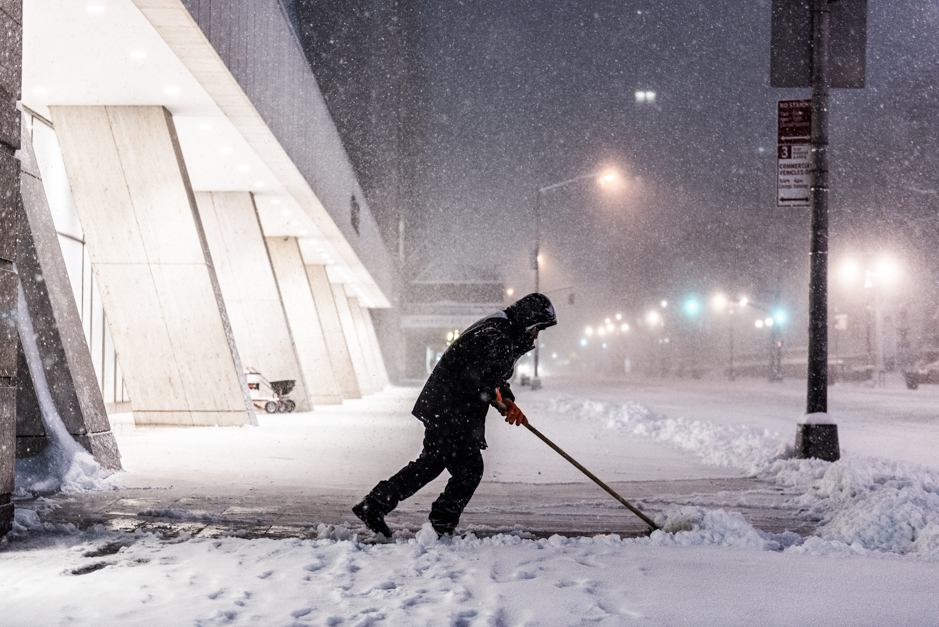 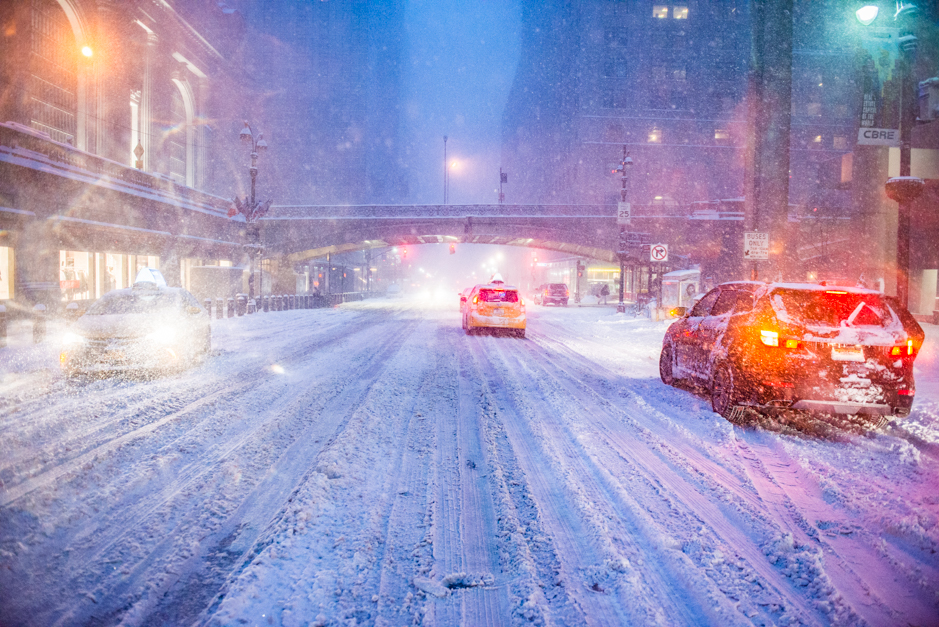 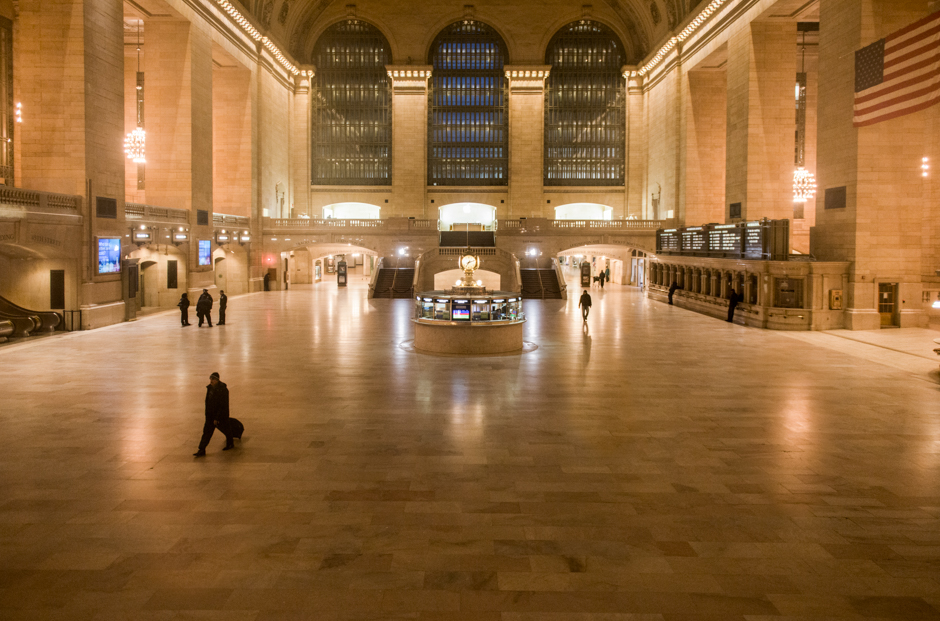 After leaving Grand Central, I made my way up the way that I came, stopping in front of the New York Public Library to snap a few shots before walking to the train to go home. I was fairly exhausted at this point and wanted to get home as quickly as I could to review my photos, post a few shots to Instagram, and head back into the storm. 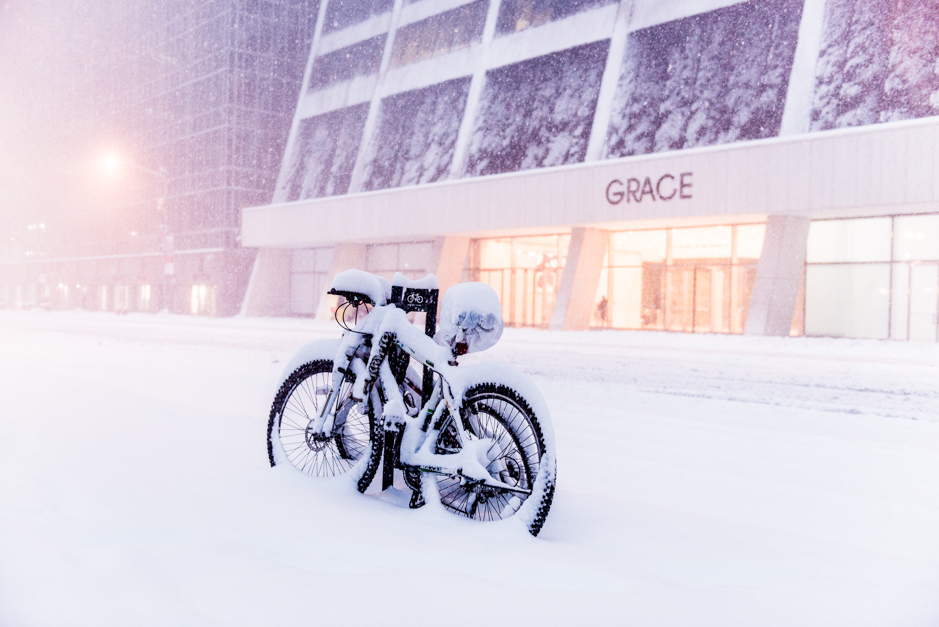 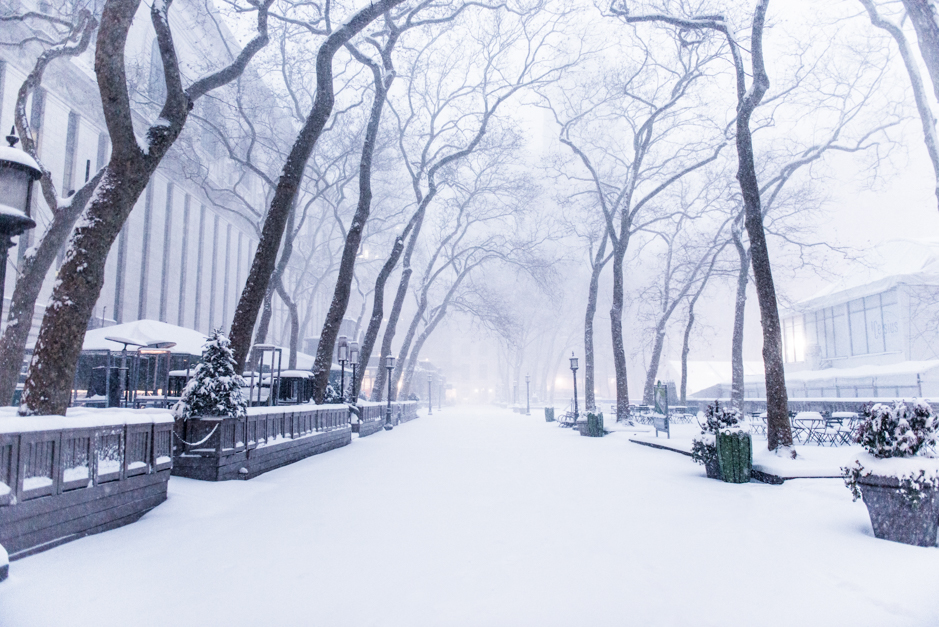 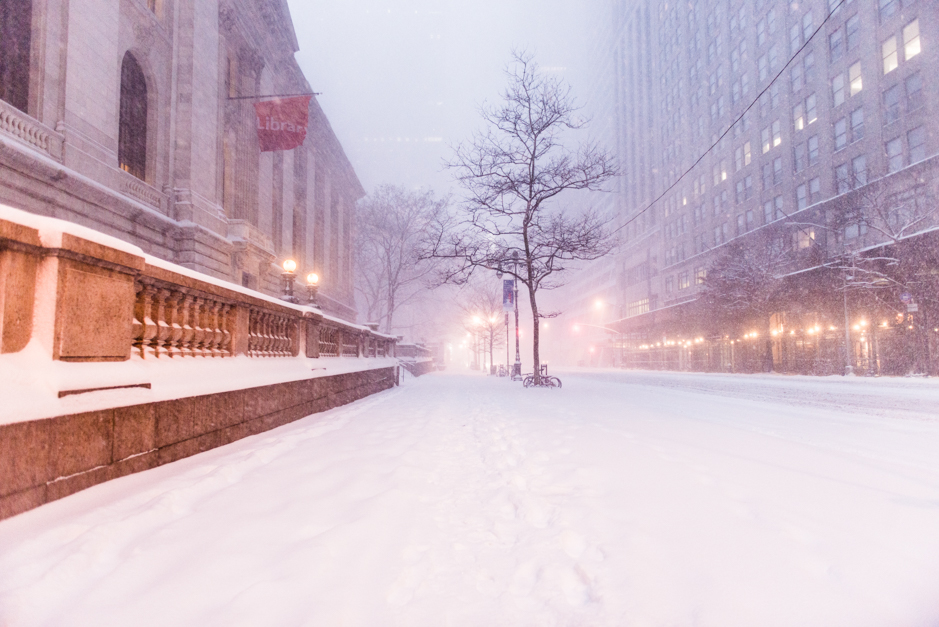 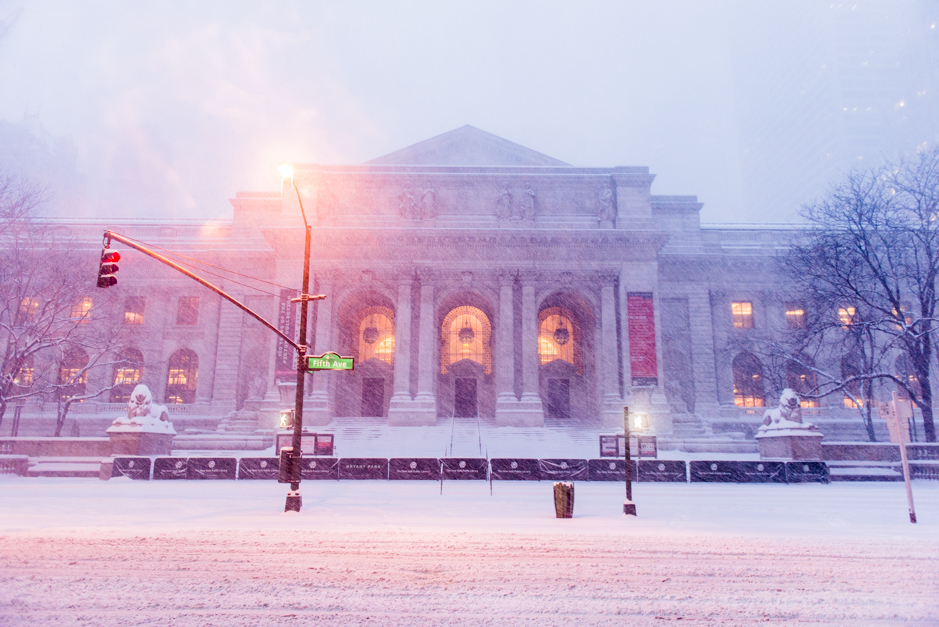 While home, I gave some more thought as to where I would like to shoot. I could either head over to Central Park, or try my luck down on the Brooklyn Bridge. Either way, it was already too late to avoid the crowds of people that I knew would be drawn to the two landmarks, and I was worried that if I traveled to the Brooklyn Bridge that the pedestrian crossing might be closed or that I may have trouble getting back uptown. So I opted for Central Park instead.

As I guessed, the park was crawling with people by the time I got there. The park is a majestic place during a snowstorm, and everyone knows it. Trying to shoot photos of some of the iconic landmarks was going to be a challenge. I either needed to wait until almost sundown, or to try to photograph the park in different ways. After walking through the park for a little over an hour, I decided to call it quits and head back in. I had hoped to head back out later that evening, but the mayor shut public transportation down later that afternoon, making it almost impossible to travel, so instead, I decided just to wait out the storm with a cup of hot chocolate, and a bottle of wine. 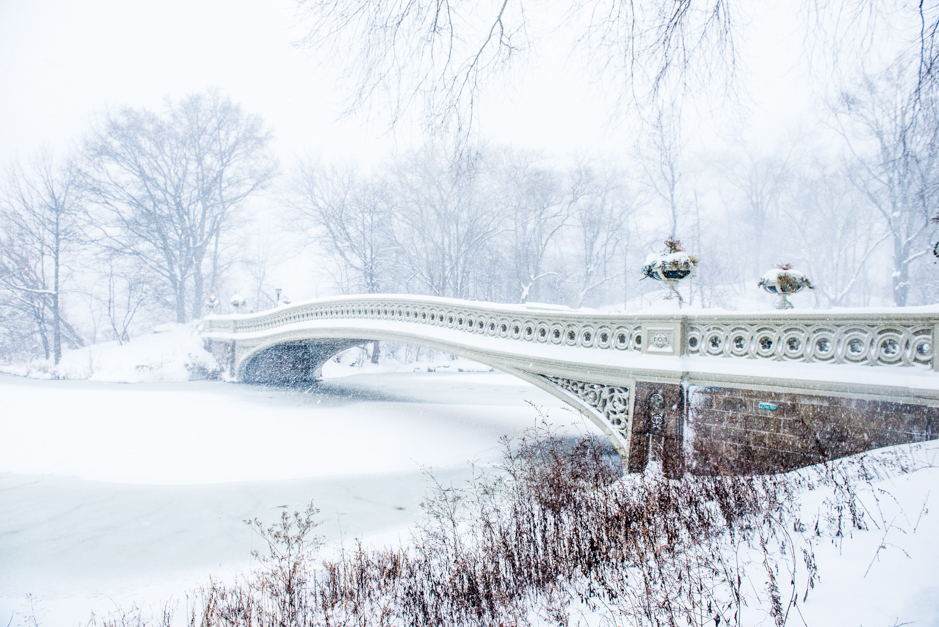 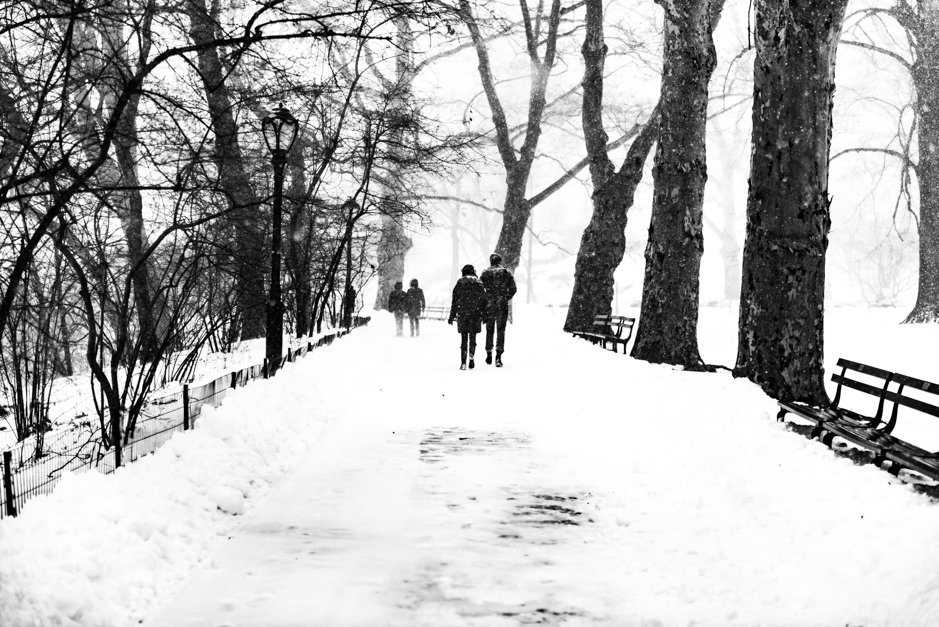 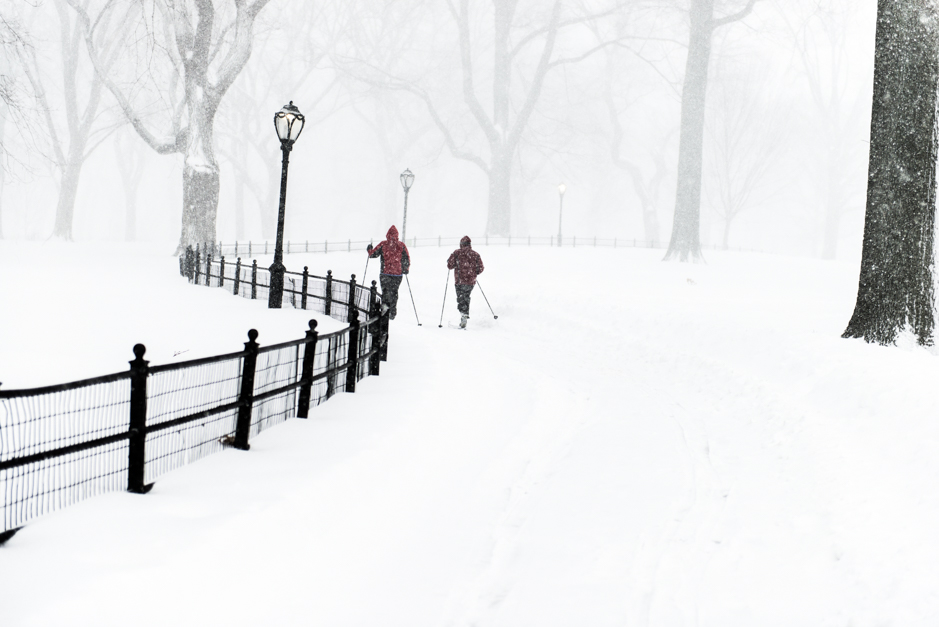 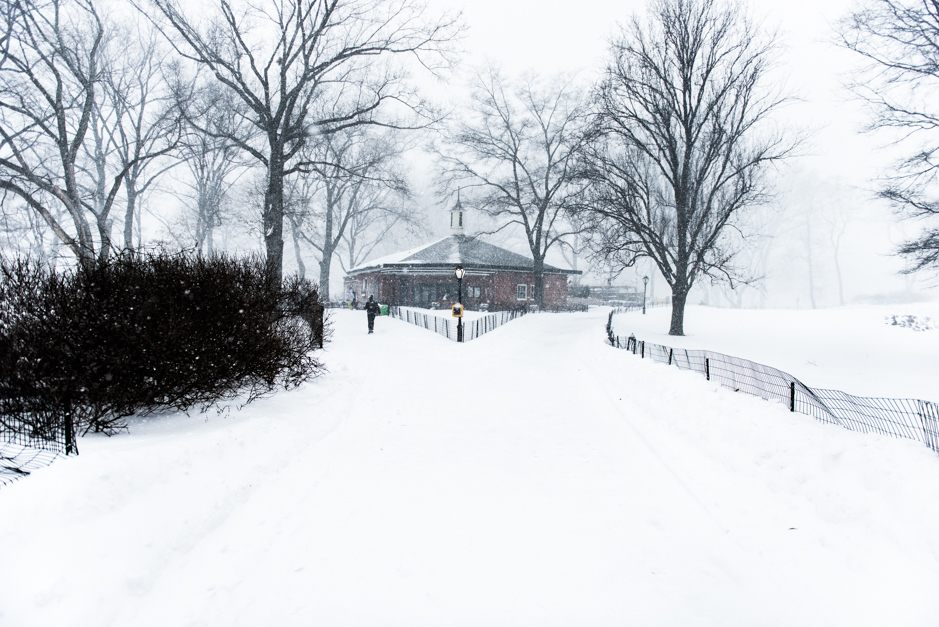 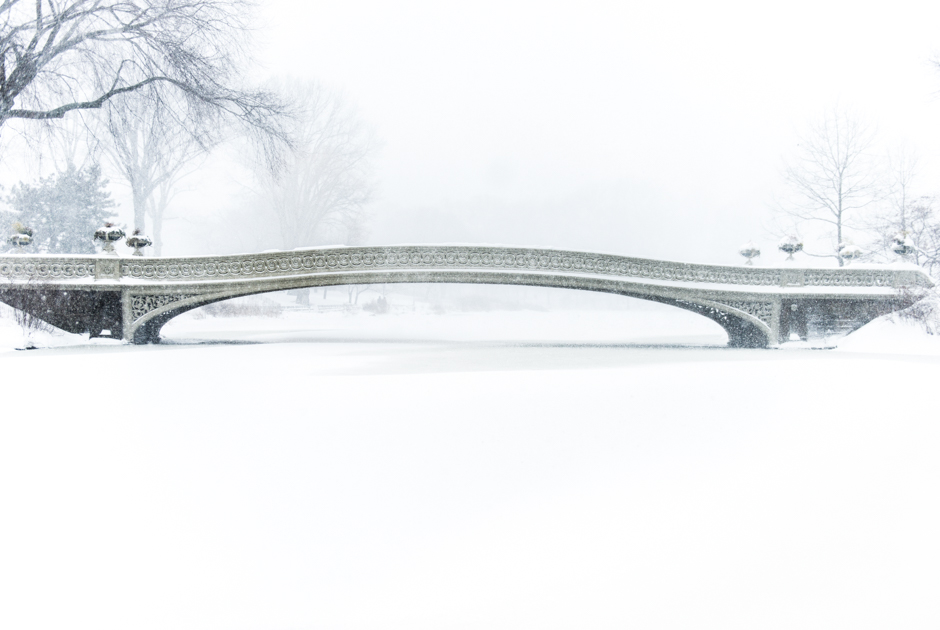 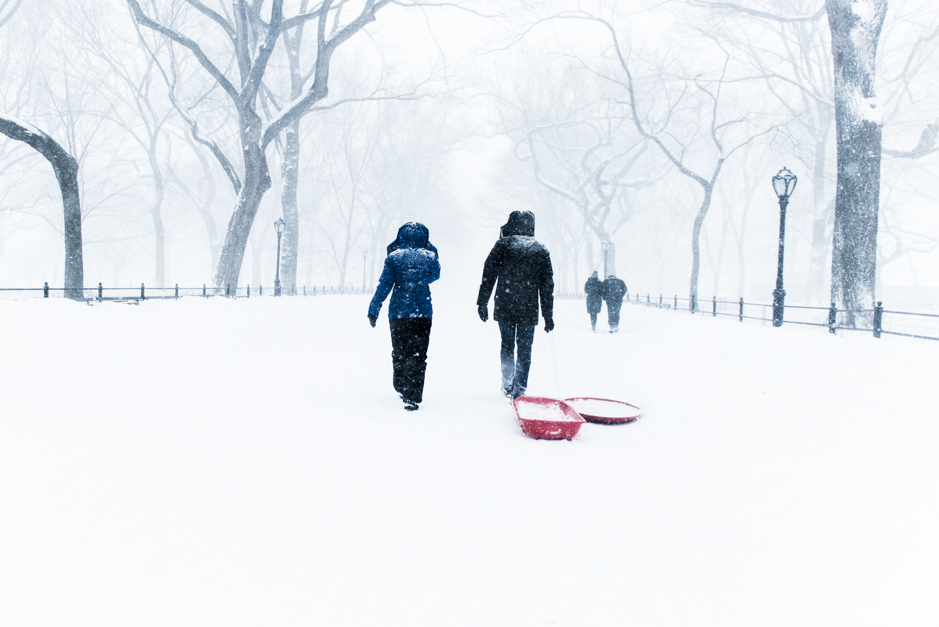